Pillsbury & Coleman, LLP, proudly announces that attorney Vedica Puri has been appointed to a judgeship on the San Francisco County Superior Court. She has been a partner at our law firm since 2005.

Vedica Puri, 47, of San Francisco, fills the seat vacated by Judge Tracie L. Brown, who was elevated to the 1st District Court of Appeal. Puri, a Democrat, is the first Indian-American judge ever appointed to the San Francisco County Superior Court.

An accomplished trial lawyer who knows her way around a courtroom 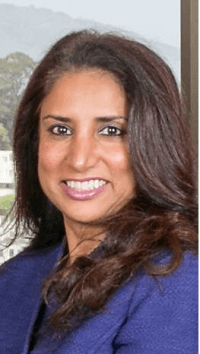 Puri’s appointment to the bench caps an impressive legal career. After obtaining her undergraduate degree from St. Xavier University in Mumbai, India, she earned her Juris Doctor degree from Santa Clara University School of Law in 1994 and was admitted to the California Bar in 1995.

Over her career in civil litigation, Puri represented companies, educational institutions, and individuals, concentrating on complex insurance coverage and bad faith litigation. She has been involved in numerous complicated and high-profile cases, including insurance coverage disputes relating to the San Bruno pipeline explosion (2010) and the North Bay wildfires (2017).

Eminently qualified for appointment to the judiciary

Puri was selected to Northern California Rising Stars (2010-2011) and Super Lawyers (2012-2016), reflecting the respect of her legal peers. In addition to her insights from more than two decades as a lawyer, she brings previous experience on the bench as well. She has served as an appointed Judge Pro Tem (temporary judge) in the San Francisco County Superior Courts since 2004.

The legal team at Pillsbury & Coleman wishes Vedica all the best in her new position. We are confident she will serve the county with honor and distinction, as she has done for our firm and our clients for many years.

Established in 1991, Pillsbury & Coleman, LLP, is one of the few law firms in California focused exclusively on representing policyholders in insurance disputes and insurance bad faith litigation.