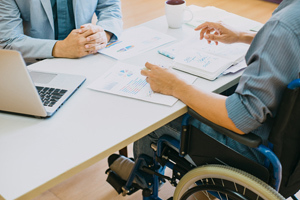 At Pillsbury & Coleman, LLP, our attorneys have taken the major long-term insurance companies to court, and won. Understanding your rights under your long-term care insurance policy is often quite difficult, because its wording and various provisions are often confusing.

This difficulty is often made worse by the fact that family members who were uninvolved in the purchase of the insurance policy, such as adult children, are usually the ones who have the responsibility of navigating the claims process on behalf of their sick and elderly parent.

At Pillsbury & Coleman, LLP, our Long-Term Care Insurance Denials Lawyer will explain your rights and benefits under the long-term care insurance policy.

Injuries and illnesses can happen to any of us at any time. When those conditions are extremely serious and result in the need for long-term care, it can be hard to meet those expenses, especially if it makes it impossible for us to work. Fortunately, many people have long-term care insurance to help deal with the significant costs associated with any treatment required due to the injury or illness.

The problem is, many insurance companies often fail to honor the obligations required of them under their policies. They deny your request for long-term care benefits, and make you fight them each step of the way in order to get the payments you deserve.

At Pillsbury & Coleman, LLP, in San Francisco, our attorneys have helped many California residents recover compensation from their insurance companies. With more than two decades of experience fighting insurance companies inside and outside of the courtroom, we are confident that we can help you with your case.

A Denied Claim Does Not Mean Your Case Is Over

In so many long-term care cases, we see people who have valid claims getting pushed around by their insurers. We carefully compile all of the required information so that we can demonstrate why your request for benefits should be approved.

If the insurers involved continue to resist paying you what you are owed, we are experienced litigators. We have recovered nearly $1 billion in cases against insurance companies in settlements and trials. We will be aggressive when pursuing your case.

Most policies will provide a set daily benefit for reimbursement of expenses incurred for the following types of care:

The policy’s Benefit Schedule will set forth the dollar amount of the daily benefit, the elimination period (the number of days that expenses must be incurred before benefits become payable), the maximum duration that benefits are payable including any maximum benefit caps, and the amount of inflation increases, if any.

Many policies, particularly those sold in the late 1990s, provide for unlimited lifetime benefits, with compound 5% annual COLA increases. For an insured suffering a chronic illness at a relatively young age, these policies can provide a significant amount of benefits. Further, the benefits provided are critically important and vital to the most vulnerable among us, typically the elderly who can no longer live independently. And for the adult children of such insureds, securing benefits under a parent’s long-term care policy is critical to avoiding their own potential financial ruin. The cost of long-term care assistance is staggeringly high, particularly in California.

When a case isn’t handled properly, a Long-Term Care Insurance Denials Lawyer can help you understand how to handle the claim properly.

Some long-term care insurers have implemented improper claims-handling tactics designed to delay or deny the payment of benefits that are owed. We have seen the following:

California law provides the minimum requirements for eligibility under long-term care insurance policies. Insurance companies are not permitted to contract around the statutorily required coverage. (Mission National Ins. Co. v. Coachella Valley Water Dist. (1989) 210 Cal.App.3d 484, 497 [The coverage provided by the Insurance Code sets the floor for coverage, but “[t]he insurance company, in drafting the insurance contract, had the right to enlarge coverage beyond the statutory language”].) Insurers can only contract to provide more or broader coverage, not less.

Insurance Code section 10232.8 sets forth various mandated provisions for long-term care insurance policies, including those that are intended to be “federally qualified” policies whereby premium payments are tax deductible and benefits, up to certain maximums, are tax free. Section 10232.8(e) provides mandatory definitions of key terms and phrases found in such long-term care policies, by importing definitions found in guidance published by the Internal Revenue Service. Section 10232.8(e) states:

But some carriers try to skirt these mandatory definitions. “Severe cognitive impairment” is defined under the IRS Notice 97-31 as “loss or deterioration in intellectual capacity that is (a) comparable to (and includes) Alzheimer’s disease and similar forms of irreversible dementia, and (b) measured by clinical evidence and standardized tests that reliably measure impairment in the individual’s (i) short-term or long-term memory, (ii) orientation as to people, places, or time, and (iii) deductive or abstract reasoning.” However, some insurance companies have issued long-term care policies in California requiring the presence of “severe cognitive impairment” for benefit eligibility while purporting only to define the phrase “cognitive impairment” rather than the complete term “severe cognitive impairment.” This would, in effect, serve to heighten the level of impairment necessary to trigger coverage by allowing the insurer to come up with its own definition of “severe.” That is unlawful in California.

Use of Deceptively Worded Claim Forms To Deny Claims

Despite this, some long-term care insurers have adopted deceptively worded claim forms in order to increase claim denials. One insurer has been found to send a “Cognitive Impairment Questionnaire” to assisted living facilities and treating physicians to complete. If the physician or facility does not check the box for “severe” cognitive impairment, and instead checks the box for “mild” or “moderate” cognitive impairment, then the claim is automatically denied without further investigation. That is wrong.

It is shocking to see the number of hurdles that vulnerable insureds must overcome in order to “perfect” a claim submitted to some long-term care insurers. Some carriers insist on monthly forms, signed by both the care provider and the insured or the insured’s guardian, in addition to a care provider’s certification of care, with a monthly invoice. Unless the forms are completed with 100% precision, the claim is automatically denied without further investigation. In one instance, a carrier denied benefits based on an obvious typo on the claim form.

In another instance, a carrier terminated benefits three years in a row, claiming that its 86-year-old insured, who had Alzheimer’s Disease and resided in an assisted living facility, no longer had “severe” cognitive impairment entitling her to benefits. Her son repeatedly called the insurance company to talk with someone in charge. But he could only talk to a carousel of call-center personnel, none of whom could speak meaningfully about the company’s determination. He could never speak with anyone with substantive authority over his mother’s claim, because the company’s procedures do not allow claim representatives to speak with policyholders. Sharp tactics like this will inevitably lead to the imposition of punitive damages.

No doubt, many carriers are grappling with an onslaught of long-term care insurance claims. Some have beefed-up their claims departments in order to appropriately manage claims and deliver on the promises that they made when selling their policies. Others have shipped off all claims handling responsibilities to poorly-trained and understaffed third-party administrators who are either unfamiliar with the covenant of good faith and fair dealing or, worse yet, disregard it.

Our lawyers are ready to help you get the insurance benefits that you are entitled to receive under your policy. To meet with one of our experienced attorneys about your case, please call our office at (415) 433-8000 or send us an email.

Does ERISA Apply To Me?
The Standard
The Hartford
Liberty Mutual Insurance